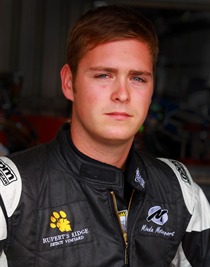 Elliot Barbour has switched teams for the penultimate round of the Dunlop Series at Winton Motor Raceway this weekend.

Youlden will step into Tim Blanchard’s FG Falcon, with Blanchard concentrating his focus on the V8 Supercars Championship, subbing for the injured Todd Kelly.

Barbour has driven for Minda Motorsport in the opening five rounds of the Dunlop Series and currently sits 16th in the series.

“I’m pretty excited. It’s a top team and a proven car and it will be great to work with Luke Youlden, which will be a massive help,” Barbour told Speedcafe.com.

Team owner White was impressed with Barbour in his limited track running during the Winton test and is confident he could be a top 10 contender.

“Elliot and Sam (Walter) had a run with us at Winton and they both did a great job,” White told Speedcafe.com.

“Elliot was comfortable in the car, so we’re keen to see what sort of job he does in racing situations this weekend.

“I’d like to see him in a solid top 10. He has been hot and cold during the year, so it will be interesting to see how he goes with us.

“He drove well in the test, quite conservative, but the day was fairly short with some wet weather. He drove well inside his capabilities, so that was pleasing.”

MWM is hoping to consistently campaign a three-car team next year, with current Kumho Series driver Morgan Haber set to step up to a full Dunlop Series program with the team next year.

As reported by Speedcafe.com previously, Haber will contest the final round of this year’s Dunlop Series with MWM at Sydney Motorsport Park next month.