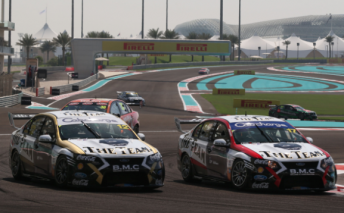 Dick Johnson Racing has committed to racing Fords in 2013 while announcing a new three-man board.

After months of speculation regarding the financial health of the Queensland team, it has been confirmed today that team founder Dick Johnson has retained majority ownership while entering into a tri-party agreement with existing co-owner Steve Brabeck (Crimsafe) and Queensland businessman Maurie Pickering (Finance Ezi).

Johnson, Brabeck and Pickering will sit on a restructured three-man Board of Directors.

The team confirmed that it will build three Car of the Future Ford Falcons for the new season, and is steadfast in its desire to field three entries in the championship.

Its own #17 Racing Entitlements Contract and Dean Fiore’s #12 Triple F Racing REC will both be utilised, while a deal between DJR and its current customer Paul Morris remains under negotiation.

As reported by Speedcafe.com recently, Morris is weighing up his options and is looking at shifting his #49 REC to Lucas Dumbrell Motorsport next year.

The #18 REC of Johnson’s former business partner Charlie Schwerkolt confirmed in May that he will move his entry to Ford Performance Racing next year.

DJR will remain a Ford team in 2013, however, the team confirmed to Speedcafe.com that a financial deal between the Blue Oval and DJR is still being negotiated.

As well as the restructured board, DJR has launched a ‘Dick Johnson Racing Junior Development Program,’ which will see the current Steven Johnson and James Moffat-driven Falcons run in next year’s Dunlop Series for yet-to-be named drivers.

The deal for the new board structure was put to bed late yesterday, and Johnson says that he’s determined to see his team return to its winning ways of just two years ago.

“Today we signed a Heads of Agreement between Steve, Maurie and myself for the future of DJR, which will disperse all the rumours we are dead and buried,” Johnson said.

“We’ve been in the dark a long time but it’s now looking very bright at the end of the tunnel.

“We’re currently preparing three Ford Falcon Car Of the Future chassis for 2013 and look forward to getting out on track next year. But we still have two rounds to go of this season and are determined to show what we know our DJR cars are capable of.”

After its naming rights sponsor of the last six years, Jim Beam, last week announcing it will not continue in such a prominent role next season, Pickering says the announcement of the new structure is the first step in sourcing new commercial backing.

“We have reinvented the wheel a little bit here today, but we are very excited about the opportunity we all have,” Pickering said.

“Our aim is to bring the brand of Dick Johnson Racing back to where it should be, which is winning.

“We will look to manage some of the opportunities which have been presented to us as a team more, and market the brand even better. We’re looking to embrace our relationship with Ford and get cars on the track with the latest technology in 2013 and win races.  And that’s the exciting opportunity we have for next season.  We now have certainty with the brand and with certainty comes sponsors.”