NHRA Championships go right to the wire at Pomona

NHRA Championships go right to the wire at Pomona 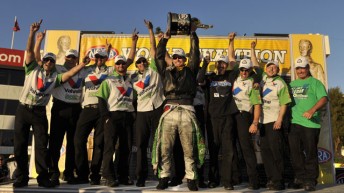 The NHRA Full Throttle drag racing Series had one of the most dramatic final days in the sport’s history, seeing Antron Brown holding onto the Top Fuel crown despite being eliminated in a round one fireball, whilst in Funny Car, the two Don Schumacher Racing pilots, Jack Beckman and Ron Capps took the Title down to the end.

Brown was unexpectedly booted out in the opening round of heats. His car exploded as he was heading down the strip with fire getting into the cabin. Quickly extricating himself from the vehicle, he was taken to the track care centre where he was treated for minor burns to his hands and legs. He had a similar explosion in the final qualifying run.

Championship aspirant, Spencer Massey was the one to eliminate Brown.

The Matco Tools racer had a nervous wait then with both Massey and Tony Schumacher in the mathematical hunt.

Brandon Bernstein ended Massey’s tilt in the second round. The second generation pilot made it all the way through to the final where he came up against Schumacher. Having come from 68 points behind to win the Championship in 2007, the 65 points that Schumacher had to overcome Brown by was not considered to be an impossible task.

Making it to the final, Schumacher had to defeat Bernstein to be crowned Champion. With a nervous Brown watching on, Bernstein got the holeshot, which proved to be crucial. Schumacher’s 3.753 elapsed time was marginally quicker than Bernstein’s 3.762, but the 17 one-thousandths of a second that Bernstein gained off the line were the clincher and left Brown elated with his first ever Top Fuel Championship win. Just seven points separated the pair at the end of the event.

Australian team Rapisarda Racing had one of their best runs of the NHRA season with Cory McClenathan. After scraping into the field on the bump spot, McClenathan out-paced pole-sitter Shawn Langdon in a massive upset. He went into round two against Bob Vandergriff. Vandergriff eliminated McClenathan on his way to the semi-finals where he took on Schumacher.

Dave Grubnic – who won one event earlier this year – didn’t have the best finish to his year, being defeated by Clay Millican in the opening round.

The battle between the Don Schumacher Racing drivers – Jack Beckman and Ron Capps – could not have been any more tense.

During qualifying, Beckman was holding sway right until the last moment when Capps went from 15th to first with a storming run, cutting the gap between the pair to two points.

They were on course for the ultimate grandstand Championship finish when they both reached the semi-finals, however they were each eliminated from their side of the draw by Courtney Force (Capps) and Cruz Pedregon (Beckman).

Should Capps have got through and Beckman remained on the sidelines, he would have taken the Championship. The pair shared bonus points – Capps for lowest elapsed time, Beckman for top speed.  As it was, just two points separated the pair.

Ultimately, Pedregon was able to get through and take the final round win over Force, his first this season.

The season had been a momentous one for the two Championship aspirants. The entire Funny Car season was full of drama and no clear Championship winner had emerged until the end. Within the DSR team, mid-season saw the crew from Capps car do a complete swap with Beckman’s crew, this proved to be the turnaround needed and the pair overcame the early dominance of John Force Racing to top the Championship.

Allen Johnson put the perfect fullstop on his Championship season by taking the win and the Championship in the highly competitive category.

He beat out Vincent Nobile in the final, after Nobile defeated Championship heavyweight Erica Enders in the semis. Prior to that he pushed Jason Line out in round two after a holeshot win.

Another to bow out early was Greg Anderson, who had a rare red light in round two when he faced up against Mike Edwards.

Pro Stock Motorcycle saw the pair of Screamin’ Eagle Harley Davidson’s round out the season in perfect fashion with Andrew Hines taking a narrow victory over team-mate, Eddie Kraewic.

The pair didn’t just race – it was the quickest side by side Pro Stock Motorcycle pass in NHRA history, Hines getting down the track in 6.766 seconds to Kraewic’s 6.805.

Hines got by Matt Smith in the semi-final, whilst Kraewic ousted LE Tonglet.

It was Hines’ sixth win of the season and only the third time in 2012 he has got by his team-mate. Kraewic, who has had a season of dominance, was awarded the Championship – his third NHRA Full Throttle Championship win.

The Finals at Pomona rounds out what has been one of the biggest NHRA seasons on record, with new speed and low elapsed time records being set right around the country in just about every category.

Pomona also brings to a close energy drink Full Throttle’s naming rights to the Championship, with Coca-Cola’s Mello Yello brand taking up the naming rights partnership to the Series from the beginning of 2013. The first event is the Winternationals back at Pomona over the weekend of February 14-17.