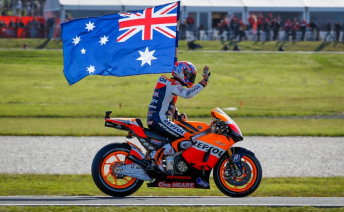 Retired MotoGP champion Casey Stoner has been inducted into the ‘MotoGP Legends’ club – an official, exclusive nomination awarded by the sport’s administrators.

Stoner was told of his ‘Legend’ status on Sunday night in Valencia after making his final appearance in the premier class before retiring from the sport.

The Australian finished third in his final race, run in mixed weather conditions.

Stoner retires from the sport at the age of 27, having amassed two MotoGP World Championships (2007 and 2011), 45 Grand Prix victories, 89 podium finishes and 43 pole positions.

Stoner made his world championship debut as a 15-year-old in the 125cc, riding as a wildcard at Donington Park in 2001. Having graduated through the same academy system that also produced his future factory Honda team-mate Dani Pedrosa, Stoner fully capitalised on the bold move made by his family of moving to Europe to further his fledgling career.

A full time Grand Prix career started in the 250cc category under Lucio Cecchinello’s guidance in 2002, but it was a step down to the 125cc class the following season that saw Stoner’s talent begin to fully flourish with four podiums and a first victory in the final round of the campaign. In 2004 he challenged for the title, taking KTM’s first-ever Grand Prix win and ending the season fifth overall.

A step back up to 250s with Cecchinello’s team in 2005 produced a thrilling battle with Pedrosa for the title as Stoner amassed five wins on the Aprilia, and the next year he and the LCR team debuted in the premier MotoGP class on board a Honda as the Australian displayed flashes of brilliance – which included a pole position in only his second race at Qatar and second place in Turkey – mixed with a few disappointing crashes. He had shown enough to encourage Ducati to make an offer to ride on their factory team the next season, and what followed was a stunning campaign.

A maiden MotoGP victory in the first race of 2007 at Qatar was a self-confessed surprise for both rider and team, but once he followed this up with wins at Turkey and China a title challenge became a more than realistic target. His standout performance at Catalunya, where he battled toe-to-toe with five-time champion Valentino Rossi will go down as one of the great races in history, while he dominated the mid-season with pole-to-flag victories at three-consecutive races at Laguna Seca, Brno and Misano. Stoner went on to secure the title with four rounds to spare, and ended 2007 with a total of 10 wins, 14 podiums and five poles.

Defending his title in 2008, Stoner fought rival Rossi intensely as the pair crossed swords on a number of occasions, their duel at Laguna Seca still being talked about as one of the greatest battles of recent years, and the Australian eventually ended the season runner-up to his Italian adversary despite taking six wins and nine poles in a strong second campaign on the Desmosedici.

2009 did not run a smooth course for Stoner, a mid-season three-race break due to fatigue uncovered a lactose intolerance that had affected his physical condition on the bike, and he ended the season fourth overall in the standings.

The 2010 season was to prove not much easier as he took only three wins – all in the final third of the season – on an increasingly hard to tame Desmosedici. By that stage it had already been announced that Stoner would ride for the factory Repsol Honda team in 2011.

The switch to Honda proved a resounding success as Stoner. Pole position and victory in the opening round in Qatar was a sign of things to come, and by the time Stoner won the race in Phillip Island to clinch the title with two more rounds to spare he had already taken nine victories. Added to that race success was an incredible consistency, which saw him finish off the podium just once – in the second round at Jerez where he crashed out through no fault of his own. Winning his home race in Australia for a fifth consecutive season handed Stoner not only his second World title, but his 32nd career MotoGP victory, as he took victory from another pole position – his 11th of the season; this represented a new record for the most poles in one season in the MotoGP four-stroke era.

Stoner went into the 2012 season as clear favourite after his dominance in 2011, however the first races revealed that Jorge Lorenzo would prove a much tougher challenge than the year before. In addition to this, rumours about his retirement had been rife from the second race in Jerez, which the Australian ultimately confirmed in Le Mans. His year was cruelly interrupted by a nasty injury obtained in a crash in Indianapolis, which saw him fracture his right ankle and damage his ligaments badly, keeping him out for three races. He came back from injury in Japan, yet it was not until his final home race in Phillip Island that he once again showed his true colours, with one of the most dominant performances of the year. He bowed out in the final race in Valencia with a podium finish, taking third in the championship with five wins, ten podiums, five pole positions and 10 front row starts.