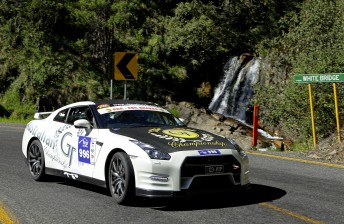 Queenslander Tony Quinn has taken his Nissan GT-R to outright modern honours at Targa High Country after a day that took a big toll on the 165-car field.

The win is his first in the Targa series since Targa Tasmania in 2010, and is one better than his second placing here at Mt Buller in 2011.

Overnight leader, Jason White, had mechanical issues with his Lamborghini early on day two, which left him stranded on the side of the road on the day’s second stage.

Quinn took the lead and never looked back, stretching his buffer over Victorian Matt Close in an Audi TT RS on every stage, to cross the line at Mt Buller with a 56 second winning margin.

Classic honours went to Queenslander Donn Todd, driving a 1971 Ford Capri Perana. The V8 had too much power for the Datsun 240Z of Jon Siddins, who had to settle for second 43 seconds in arrears, but scored Early Classic handicap honours.

Adam Spence easily won the Showroom class in his new Renault Megane RS 250, while Dean Evans had a runaway win in Showroom 4WD in his Mitsubishi Lancer Evo X.

The eight classes across 130 competitive kilometres saw many cars succumb to mechanical issues or driver error. White was the biggest loser of the day, ending his winning streak, which now ends at five.

Quinn was delighted to be back on top of the Targa podium, with long-time co-driver Naomi Tillett.

“It was easy,” Quinn joked at the finish. “It’s the same as every other day – you go as hard and as fast for as long as you can, and that’s all we did.

“The car was good and we’ve had a great weekend. The car was brand new last year and we had a lot of trouble with it, but this year’s it’s been very reliable.

“It would have been better if Jason (White) had stayed in the event, so we kind of coasted home over the afternoon stages and it’s great to win here for the first time.”

Todd was delighted to make it back-to-back wins at Mt Buller.

“It’s been a really good day with close competition, which is one of the enjoyable parts of rallying,” Todd said.

“The car has been faultless all day, but those guys (Siddins) in the Datsun, gee they’re quick!”

The next round of the CAMS Australian Targa Championship, the third in the series, is Targa Wrest Point in Hobart in February.