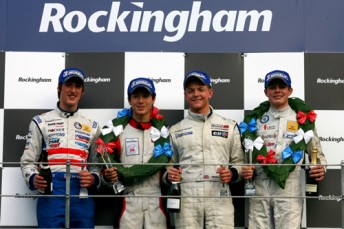 Matthew Brabham has finished second in the final round of the Formula Renault BARC Winter Series at the Rockingham Race Circuit.

After a troubled qualifying session, Brabham started from ninth on the grid and, after consultation with team principal Cliff Dempsey, elected to run slick tires on an extremely slippery surface. Virtually all the other front-runners chose to remain on wets.

Brabham, competing in the UK thanks to his scholarship in the Team USA car, picked up two places on the opening lap and worked his way into second by Lap 12, soon on the tail of race leader Jack Aitken (Fortec Motorsport).

Aitken made life difficult for Brabham, however, driving him into the wall on the exit of the oval Turn 1 and later pushing him onto the grass at the exit of the Tarzan hairpin on Lap 14.

The pair came to blow on the final corner, with Brabham spinning out. He crossed the finish line in third place, but post-race, officials handed Brabham second place after officials allowed the race to run one lap too long.

Furthermore, Aitken and Brabham were summoned to the stewards’ office for their actions during the race, but no further action was taken.

“(Racing against Aitken) was definitely different racing to what I’m used to!” Brabham said post-race.

“It was definitely an eye-opener and I’ve never really seen that kind of stuff before so I learned a hell of a lot. I’ll definitely take some of it back to America with me.”