Australian wins at the World Under 18 Championships

Australian wins at the World Under 18 Championships 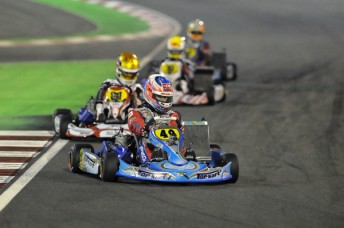 Australian Joseph Mawson won the final round of the CIK-FIA Under 18 World Karting Championship in Bahrain on Saturday night.

The win, ahead of Monaco driver Charles Leclerc and Brit Ben Barnicoat, is the first by an Australian in a World Championship event since 2010 V8 Supercar Champion James Courtney won the 1997 World Championships.

For Mawson, he was overwhelmed with emotion when crossing the line knowing that this success was the reward for the dedication not only by him but also those around him.

“When I crossed the line for the win, I was just overwhelmed with emotion.  It is the first time ever that I’ve cried in my helmet,” said Mawson.

“I would have been happy with a podium finish to round the year off but to come away with a win is just amazing – not only for me but also for Australian karting.”

Mawson believes the race was one of the toughest that he’s ever contested and undoubtedly the biggest win of his flourishing career.

“It was definitely a hard race, the track layout was extremely tough and made it hard to get a break.  The last six laps I was under a fair bit of pressure, as if someone is within four kart lengths they’re within striking range,” he said.

“I just put my head down and did the best that I could and on the last lap I had to block, which made it pretty interesting but in the end I got the win and to cross the line first in a world championship event is just unreal.

“None of this would be possible without the dedication and commitment from by parents, along with Kart 1 Racing’s Tim Craig, the Australian Motor Sport Foundation, Top Kart, Fujitsu, Xzuit and Bell Helmets.”

Also competing at the event was Mawson’s fellow Sydneysider Jacob Parsons.  After a challenging time during the pre-finals, Parsons started from the rear of the 34-kart final before charging his way to 15th place at the finish of the 22-lap final.

After being fastest during Thursday’s practice, James Abela (Horsley Park, NSW) endured a tough time in the heat races where he was plagued by mechanical issues, which meant that he was unable to qualify for the main event in the Academy Trophy.

Britsh driver Henry Easthope won the three-round Under 18 championship by a mere one-point ahead of Leclerc and French driver Anthoine Hubert.  Mawson was one point further back in fourth place.