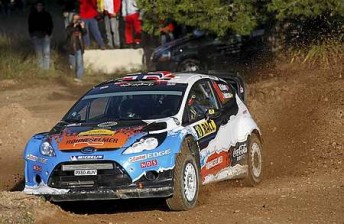 As the rain fell a flood of retirements followed including Petter Solberg (Ford), the Skodas of New Zealand’s Hayden Paddon and Sebastien Ogier, and the Minis of Dani Sordo and Australia’s Chris Atkinson (Mini) who suffered suspension damage in the treacherous conditions.

Ostberg, who earlier this year outpaced the field in his Adapta Ford to win across the border in Portugal, is a hot tip to join the Citroen factory squad in 2013 as Loeb will step-back to a part time program.

“We have been pushing hard and taking quite a lot of risks, but still making no mistakes. We are still here and I am very happy with that,” said Ostberg.

“I wasn’t expecting to be fighting for the lead. We were on the harder tyre so I was actually expecting to lose some time. I think the surface is getting worse for the cars behind us, but also we have been driving really well. We’re pushing to the maximum everywhere and I don’t see any places where we could have gone much faster!

“I see no point in looking back, so we will make sure we have the right tyre choice now and then just continue to push as hard as we can.”

The nine-time world champion is ideally placed to challenge for the lead on the second day as the event switches from gravel to sealed surfaces for the rest of the event.

Jari-Matti Latvala is also in the mix back in third place, while the rest of the leaderboard features a mix of WRC and S2000 machinery.

Atkinson had hoped to make the most of his final outing in the Mini, but without the ideal set-up in the morning the Australian struggled on hard tyres. The Aussie hit a rock on the second stage and damaged the car’s suspension. Although it was fixed at the lunchtime service he suffered further suspension damage in the afternoon and withdrew from the leg. He will re-join the event on Saturday under Rally2 regulations.

Brendan Reeves sits seventh in the WRC Academy category after a challenging day which included a puncture and a late engine drama. Spaniard Jose Suárez heads the one-make division for junior drivers.

“It has been a big challenge,” said Reeves.

“It wasn’t so fun this morning because I didn’t have the set-up right for the first two stages. It was so slippery and the car was just stepping out at the rear all the time – it was like a powerful rear-wheel drive car!

“We changed the set-up and the car felt really good for the long stage [SS3] but about 12 km from end there is a small water splash and we hit some concrete just after that and got a puncture. Then we waited for Jose [Suárez] to go past, caught him and got stuck behind him for about 10 km so we lost a lot of time there too.

“This afternoon we went with a similar set-up. The first stage [SS4] was good, until we went off the road on a muddy section towards the end. So, on the long stage [SS5], we just decided to play it smart and make sure we had a clean run through.

“We’re not where we want to be at the end of the day, but at least we are still here.”

Meanwhile Kiwi ace Hayden Paddon had his hopes end in the morning stages.

“Another difficult day but on the up side we still have two days ahead to set some good stage times,” said Paddon.

“We were not expecting so much rain, and our hard tyres did not work so well. Got stuck on the side of the road only going about 10kmph. A lot of cars have gone out today! Car is all ready now to rejoin tomorrow – we can still prove our point this weekend.”