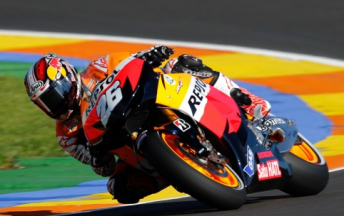 Dani Pedrosa has broken the Valencian lap record to take a stunning pole position for the final MotoGP race of the 2012 season.

The Repsol Honda rider set a 1:30.84s, beating his season-long rivals Jorge Lorenzo and Casey Stoner by nearly half a second.

Stoner, in the final MotoGP race of his career before retiring, held the top spot in the critical final 10 minutes, only to be overcome by Lorenzo.

Stoner came back out onto the circuit and returned to the top of the time sheets, only for Pedrosa to blow both of their times away with his pole lap.

Lorenzo’s final tour edged him back in front of Stoner, but was no where near the blistering Pedrosa.

Cal Crutchlow will start fourth, ahead of Stefan Bradl and Andrea Dovizioso

Rounding out the top 10 is Ducati rider Nicky Hayden, Alvaro Bautista, Hector Barbera and Aleix Espargaro – the first of the CRT entries.

The race will be held tomorrow, with wet weather predicted to play a part in the event.