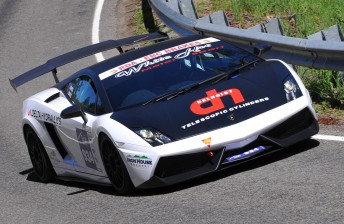 After a slow start to the opening day of Targa High Country, round 2 of the CAMS Australian Targa Championship, Tasmanian Jason White blitzed the afternoon stages in his Lamborghini to hold a 15 second buffer over his modern rivals with one day to go.

White, the defending title holder, was third at the half way point at Lake William Hovell in Victoria’s north east, with local Matt Close, in an Audi TT RS, and Queenslander Tony Quinn, in a Nissan GT-R, tied with a four second lead.

But White stormed home on the run to Mt Buller, setting the fastest time on each of the four stages to overtake Quinn, with Close finishing a further five seconds back.

The Showroom class was dominated by Adam Spence in his new Reanult Menage RS 250, with Dean Evans the leading 4WD Showroom contender in his Mitsubishi Lancer Evo X.

White has won the past five Targa events and is hungry to keep his winning streak going this weekend. But a late drama with his car leaves him with an anxious day ahead.

“We’ve got a slick knock in the front end that sounds like a driveshaft problem, so we were being a little bit gentle on the final stage up Mt Buller, but we still have the lead and it’s a good result for the day,” White said.

“Hopefully it’s an easy fix for the boys and we’ll be back out there tomorrow.

“The tighter and twister stages tomorrow definitely suit us more. I think that provided nobody has issues with their cars tomorrow, the times will be very close. There’ll be a battle on, that’s for sure.”

Matt Close knows he is within striking distance should White experience any trouble.

“We weren’t aware that we were leading at the lunch break, because we’re developing the car and had decided to just drive it as we saw it,” Close said. “But we were pleasantly surprised.

“I do enjoy the Skyline stage tomorrow as it suits our car, but the Big River stage is a bit of a marathon where you need to look after your tyre pressures, so whoever does the best job out of that will probably take the cake.”

Jon Siddins had a brilliant morning, opening an 18 second lead in the hotly contested classic class, with Haysman second and Todd just one second further back.

He held that buffer across the afternoon stages until the sprint up Mt Buller when Todd pushed his V8 to within seven seconds of Siddins.

“To be honest, I’m surprised we’ve gone as well as we have today and we would have preferred it to be wet, but we’re very happy so far,” Siddins said.

“We lost some time going up Mt Buller as the car lacks the horsepower of the V8s that we’re running against. We don’t have anywhere near as much grunt as they do, so we just need to try and carry a bit more speed through the corners.

“The stages tomorrow should be more to our liking. The plan is to try and build enough of a lead so that we can hang on to it going up Mt Buller again.”

Matthew Rickards had a brilliant day in his Evo 7 to comfortably lead Early Modern, Craig Dean is well in control in Showroom Sports, and David Mathias is on top in Regularity.