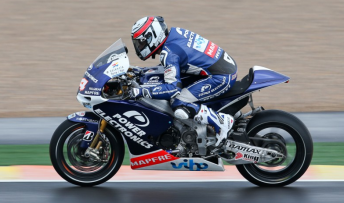 Randy de Puniet has created his own piece of MotoGP history, becoming the first of the CRT class riders to top a MotoGP session.

Most leading MotoGP riders did not turn a lap during the second session.

Both practice sessions were affected by wet weather, causing a major disturbance to MotoGP teams for the final MotoGP of 2012.

Hayden could only manage third in the second wet session, with the day belonging to history maker de Puniet.

“This morning I felt very comfortable with the bike and even though the track was wet and the rear was moving around,” the Frenchman said.

“I could tell that the new surface has good grip. The bumps have been taken out and it is easier to ride.

“The track conditions this afternoon were mixed but we tried to get a feeling for the slicks in the damp. It was hard to tell where the circuit was wet and where it was dry because the tarmac is dark. Even so, I felt comfortable and I am happy because we finished the session on top.”

Qualifying will be held on Saturday afternoon local time.