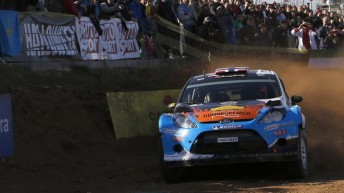 Norway’s Mads Ostberg has taken a slender advantage going into the first service on day one of the Rally de Espana.

Ostberg (Adapta Ford Fiesta RS) and co-driver Jonas Andersson held onto their lead after the 44.02km third stage ahead of the service break.

He had a spin during the stage, a composition of gravel and asphalt, which he claimed had cost about 10 seconds.

Estonian Ott Tanak (M-Sport Ford Fiesta) has held out Citroen’s Mikko Hirvonen who remained ahead of team-mate Sebastien Loeb, the winner of the third stage.

Loeb is almost 20 seconds off the lead while next placed Jari-Matti Latvala is 55.1s behind the hard-charging Ostberg.

Petter Solberg (Ford Fiesta RS) reportedly struck the same rock which took him out of the Spanish rally last year on the 26km SS2 forcing his retirement when he was 3.5s off the lead.

There is plenty of drama in the S2000 category with Per-Gunnar Andersson losing the lead on SS3, reporting that a diff failure left him on the long stage with only front-wheel-drive.

Ireland’s Craig Breen overtook Andersson and has a healthy lead of over a minute.

Aussie Chris Atkinson (Mini) has made up some lost time to be eighth overall but is more than two minutes behind Ostberg.