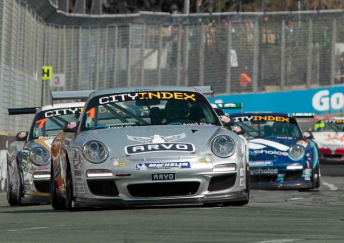 The category will also add its own marquee event too its calendar, with the introduction of the Porsche Rennsport Australia event. CLICK HERE for Speedcafe.com’s story yesterday.

Carrera Cup Australia will also make a return to Winton Motor Raceway having previously raced at the regional Victorian circuit in 2003, 2004 and 2007.

The only non-Shannons Nationals event will be run at all-Porsche Rennsport festival.

The series will again feature the popular Jim Richards Endurance Trophy format, with an endurance race to be held at Mallala, Winton and Ipswich.

“The outlook for the 2013 season is sensational – both Carrera Cup and GT3 Cup Challenge have great, practical schedules for next year’s season,” said Blaikie.

“The reduced seven-round calendar is ideal for our Porsche customers. And while the season has been reduced by one event, we have retained five truly iconic Australian motorsport events while also returning to two of the country’s greatest permanent race tracks – Winton and Sydney Motorsport Park.

“For GT3 Cup Challenge, our drivers will still get to experience racing on Australia’s greatest permanent race tracks – an enticing factor for the series – while retaining the popular Jim Richards Endurance Trophy format for the award’s third season.”