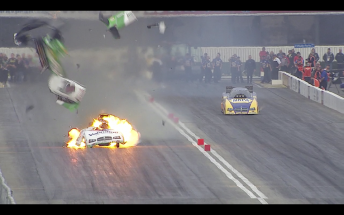 Current NHRA Full Throttle Funny Car Series points leader, Jack Beckman’s tilt at the Title hasn’t got off to the best of a start after a spectacular explosion in the final round of qualifying on the first day of the final event of the year at Pomona.

Beckman was lined up against Ron Capps – who sits just four points behind him in the Championship heading into this weekend – when toward the end of the run, it all went awry.

The telltale sign before the explosion came when the flames from the Valvoline Funny Car changed colour, next minute, the entire body was blown off. Thankfully for Beckman, he was able to immediately deploy the parachutes and the flaming wreck was able to come to a standstill and he exited the vehicle under his own steam.

“I’ve never had that happen before, and I’m not going to sign up for it again,” said Beckman. “I had just let go of the wheel to reach for the parachute, and all of a sudden, there was no body on the car.”

Beckman was uninjured in the spectacular incident.

Capps himself had a box seat for the explosion after struggling away from the line. The problems experienced by Capps and Beckman have allowed John Force Racing team driver, Mike Neff to close into 86 points behind the other pair in the Championship. All three are chasing their first NHRA title.

Courtney Force was the best of the Funny Car runners in day one competition.