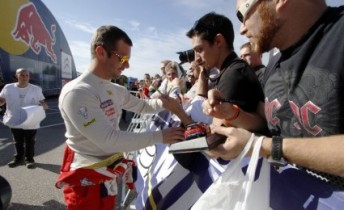 French rally supremo Sebastien Loeb set the fastest time in the qualifying stage and has exercised his right to start from 14th position on the road for the Rally de Espana.

Loeb and longtime co-driver Daniel Elena wound up their Citroen DS3 to set the benchmark time near Salou.

The second fastest in qualifying, Evgeny Novikov (Ford) will start from 13th with Loeb’s Citroen team-mate Mikko Hirvonen 12th on the road.

Australia’s most successful World Rally driver, the Queenslander Chris Atkinson, has chosen to blast off first in his Team Italia-prepared Mini.

It is generally thought drivers further down the starting order will be quicker with dust not expecting to hamper the later runners as it did last year.

Weather could also play a factor with a 20 per cent chance of rain predicted.