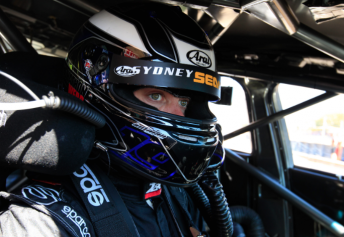 Having missed the opportunity to drive V8 Supercars’ own prototype COTFs (due to his height), this was Webb’s first-ever drive of one of the new-generation cars.

The Tekno team currently compete with Triple Eight-built Commodores, and will purchase two new COTF Commodores VFs for the 2013 season.

Despite the limited laps, Webb said he enjoyed his seat time in the new car.

“It was just an opportunity to have a feel and see what the whole Car of the Future is about,” Webb told Speedcafe.com.

“For me, it has been nothing but talk, so it was good to finally get a chance to have a feel and see what it’s all about.

“There’s definitely some cool innovations. The gearbox is one of the better things. There’s still some things for the category to sort with the cooling, but overall, it’s not a massive step away from what we have at the moment.

“There’s still a long way to go with the development of the package, but it’s not far off what I was expecting.”

Webb expects to have his team’s two Commodore VF chassis built and delivered in the early weeks of 2013.