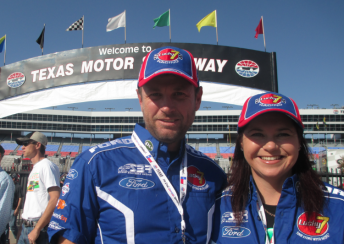 Ian and Kelly Penman in Texas

Queensland couple Kelly and Ian Penman have just returned to Australia after completing a six-day ‘tour of a lifetime’ to the AAA Texas 500 at the Texas Motor Speedway near Dallas.

The pair won the tour after successfully entering the Lucky Seven Buy to Fly promotion earlier this year which was run nationally through their franchise system and Speecafe.com.

No wonder they were tired on their return!

“It was the most amazing experience we have had,” said Kelly.

“We really did not know what to expect, but what we were involved in was just fantastic.

“The guys at BAM Tours took care of us from the time we left to the time we arrived back home.

“We stayed at an amazing place (Gaylord Texan) and really went five-star all the way in regards to our experiences and how we were treated.

“We cannot thank Lucky 7 enough for the opportunity to enter their competition.

Ian, who is the race fan of the family, was blown away by the experience.”

“Kelly came home one day and said she was going to win this prize for me. When she got the call from the guys at Lucky 7 we couldn’t believe it,” said Ian.

“To experience NASCAR as up close as we did, to go for a ride in a NASCAR and meet Marcose Ambrose and several other drivers, was incredible.

“NASCAR is amazing, but would could not have been anywhere near as close as we were without the inside knowledge of the guys and BAM Tours who put it all together.

“We have to thank Phil Saddleton and the team at Lucky 7 for an experience we will never forget.”

See below for a photo gallery of the pair’s Texas NASCAR Tour.

Ian and Kelly Penman in Texas