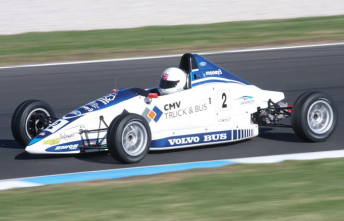 Young driver Luke Marquis will make his national Formula Ford debut at Winton next weekend in the final round of the Australian Formula Ford Championship.

Marquis effectively replaces Garry Jacobson in the team, who remains on the sidelines due to the injuries he sustained during his qualifying accident at Mount Panorama last month.

Sonic team owner Mick Ritter says that he is keeping Marquis’ expectations in check ahead of his national racing debut.

“It’s still early days for him, so we don’t have any huge expectations on him for Winton,” Ritter told Speedcafe.com.

“We’ve done two tests in the last fortnight, and he’s starting to hit a point where his confidence is rising and he’s oncoming on in leaps and bounds.”

Beyond the final round at Winton, Ritter says that he hopes to see Marquis compete in the full national championship next year.

“At this stage, he’s could do the state series again with selected national rounds, but ideal, he’ll do full national program,” Ritter said.

“We’ll have to wait and see. We’ll both sit down and look at it, but if we think he’s ready, then we’ll do National.”

The Formula Ford Championship will support the penultimate round of the V8 Supercars Championship at Winton Motor Raceway on November 16-18.