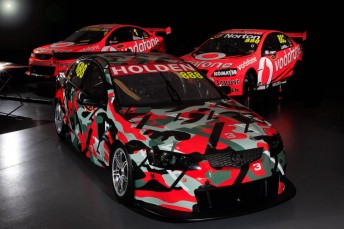 The champion team was due to shakedown and test its second COTF Commodore VE, but has elected to keep it on ice until after the 2012 V8 Supercars Championship is complete.

Team manager Adrian Burgess says that due to the closeness of the past few V8 events, the team will concentrate on its first car, now equipped with all of the ‘control’ components that are available under the new regulations.

“With most of our guys flying back from Abu Dhabi and the tight turn around to Winton, we though it would be better to concentrate on our first car. We can achieve the same thing with it.

“The second car is close to being complete. It’s only two or three days away, but there’s going to be no advantage in it so we’re not rushing anything.”

Burgess confirmed that the team will complete its test with the latest version of its own gearbox cooling system, with the package having been uprated based on the information it gathered from its first test back in early August.

Ford Performance Racing, the Holden Racing Team, Stone Brothers Racing and Garry Rogers Motorsport have all tested their first COTF vehicles with their own cooler designs as the category continues to chase a thermally and aerodynamically efficient packaging solution for the new Albins transaxle gearboxes.