Porsche to hold its own race event at Sydney Motorsport Park

Porsche to hold its own race event at Sydney Motorsport Park 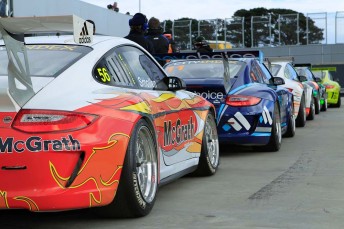 Sydney Motorsport Park will host the largest gathering of Porsches at one race venue next May, which will include rounds of the Porsche Carrera Cup Australia Championship as well as Porsche GT3 Cup Challenge.

Having taken inspiration from similar events in North America, the inaugural Porsche Rennsport Australia Motor Racing Festival will be held on May 25 and 26 next year at the Eastern Creek venue.

Racing and road going Porsches of all types and vintage will share the circuit, with seven different categories of Porsche racing (including Regularity and Sprints for Porsche Club cars) to highlight the two day event.

The Carrera Cup and GT3 Cup Challenge events will both count towards each of their championships.

“Porsche Rennsport Australia is shaping up as the must-attend event for all Porsche enthusiasts in 2013,” says Porsche Cars Australia Marketing director Kevin Nicholls.

“With over 60 years of Porsche history in Australia we have a large customer and fan base to draw from. The cars, the people, the tales … the opportunity to be Porsche proud for an entire weekend and share a love of the brand will be on offer to all.”

Local and rare historic Porsches as well as famous racing cars from the Porsche Museum in Germany will be on display as well as performing demonstration laps.