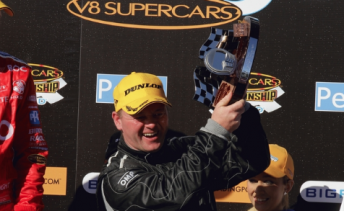 Jason Bargwanna will make his debut in the Auto One V8 Ute Series at Winton Raceway in two weeks time.

The former Bathurst 1000 winner will drive the Auto One wildcard entry, last driven by George Miedecke at the Armor All Gold Coast 600. Miedecke scored the best result of any wildcard this year, scoring a second placing in Race 2 and fifth overall for the round.

While Bargwanna has never raced in the class, he has driven the cars and is hoping he can turn his Winton knowledge into a decent result.

“I’ve drove Jack Elsegood’s ute a few years ago at a test day, but this will be my first time racing them,” said Bargwanna.

“It’s amazing to think that at this stage in my career I’ll be a rookie again.

“I’m really looking forward to the challenge. A lot of people underestimate how tough these things are to drive and how good some of the guys are in the series. I’ll be sticking the elbows out and having a good crack.

“I’ve won in everything I’ve ever raced at Winton. I’ve done a lot of testing there over the years so you could say it is one of my home tracks.

“I think that as a race car driver you want to go out there and do the best you can and run with the front mix. I’ll be giving it everything I’ve got, the car seems to have the capability so I’ll hopefully be running in the top half of the field and trying to survive.”

Bargwanna and the rest of the Utes field will hit the track for practice on Friday, November 16, followed by qualifying and Race 1 on Saturday before the weekend concludes with Races 2 and 3 on Sunday.