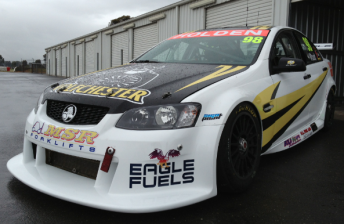 Glen Wood has revealed the colour scheme of the Holden Commodore that he will drive in the Dunlop Series at Winton next weekend.

Wood is getting his first drive of the car today at Winton – his one and only test before the Winton round.

Wood replaces the car’s regular driver Elliott Barbour, who has elected to sit out the remaining rounds of this year’s season.

The black, yellow and white Commodore will be supported by Wolfchester, Eagle Fuels, Bahco Tools and Equity One, among other backers.

The round marks the first time that Wood will compete in the same race as his old brother Dale, currently ninth in the Dunlop Series points.

“It will be great to race with Dale there. He has a lot of experience in these cars, so I don’t expect to be battling with him, but I know he’ll be there in support,” Wood told Speedcafe.com.

“I haven’t really got an expectations. If I could have a weekend around the 10, I’d be pretty happy with that.

“I’ve done all of 28 laps around Winton in a V8, so I have hardly any experience. I’m using today to get used to to the car, work with the guys and work on technique.”

Wood says he is using this one-off round as a precursor to next year’s Dunlop Series, where he hopes he can secure the budget to complete the entire season.

“I’m working on doing more next year,” he said.

“I have a few sponsors who have committed and that’s ultimately where I’d like to be, and for sure, Minda would be one of the first teams I’d pursue that with. I’ve basically done my entire career with them.”

The penultimate round of the Dunlop Series will be held on November 16-18.