Aussies out to impress at WRC finale

Aussies out to impress at WRC finale Australia’s Chris Atkinson and Brendan Reeves will take to the sealed and gravel roads of Spain this weekend in their final hit-out of the 2012 WRC season.

Atkinson will be an outright contender in his final run for Mini, while Reeves has his sights set on second place in the ARC Academy category.

This will be Atkinson’s fifth Rally de Espana having last attempted the event behind the wheel of a Subaru WRC in 2008 where the Queenslander achieved his best result of seventh.

“The MINI has been quick on tarmac this season and we’ve made some improvements to the car which I’m looking forward to testing out on the fast Catalan roads,” said Atkinson.

“Hopefully conditions stay consistent and dry this weekend as the roads can become really abrasive, and big cuts can form on the corners, spraying gravel and dirt across the hard surface.

“Also, during the rally we do a full set-up change from gravel to Tarmac Friday night. The Qualifying Stage is one mixed road though, which means we need a special set-up especially for it.

“I’ve been fortunate enough to spend some time with driver coach Rob Wilson this year in the UK and the confidence is high heading back onto the asphalt sections.

“It’s been a great year rallying with the Motorsport Italia team in the MINI and hopefully we can finish off the year with a solid result.”

As it was for Rally de France, Atkinson will be reunited with Aussie Glenn Macneall with regular co-driver Stephane Prevot double booked with commitments to historic Porsche competitor Christian Kelders. 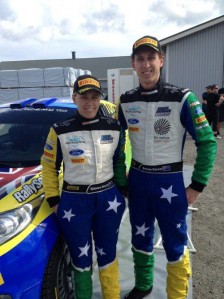 The brother and sister team of Rhianon Smyth and Brendan Reeves

Reeves will be aboard a Ford Fiesta R2 in the one-make series for drivers under the age of 24. Along with co-driving sister Rhianon Smyth, they head into the event with the chance to make history in a number of areas.

Whilst the 2012 WRC Academy drivers’ title has already been won by Welshman Elfyn Evans, Reeves goes into the rally in second place, two points ahead of Spaniard Jose Suarez. As long as he finishes ahead of Suarez, second outright in the championship will belong to Reeves, giving him the honour of being the highest placed Australian driver ever in a WRC championship.

Smyth, meanwhile, currently leads the co-drivers’ championship, with Evans changing co-drivers throughout the series. A victory for Smyth would make her the first woman in history, and the first Australian (either male or female) to secure an official WRC championship (other than the WRC Ladies’ Cup which ran from 1990-1995).

Should results go their way, Reeves and Smyth would also be the highest placed brother and sister team in any WRC series in history.

“We have a little bit of experience from rallying in Spain – we were here for the Pirelli Star Driver programme in 2010 and we did a pre-Portugal test in the north of Spain earlier this year. But when it comes to the stages, this event will be completely new to us,” Reeves said.

“The dual surface will certainly be a challenge. We’ll do the Academy test on gravel which will prepare us for the first day, and we are coming off the back of two tarmac rounds so hopefully the feeling will still be pretty fresh for the second day.

“The first day will have the odd section of tarmac, but for us it will be less about set-up and more about preserving the tyres. You can get a lot of oversteer driving gravel tyres on tarmac sections and this can really damage the tyres – and the stages seem to be quite twisty – so you have to be careful not to completely destroy the rubber.

“I am really looking forward to the battle for second place. Jose [Suárez] will be hard to beat on his home event, but we want to win and second in the championship is our goal.”