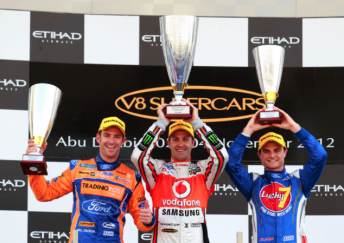 Jamie Whincup has dedicated his Abu Dhabi three-peat to his team’s major sponsor Vodafone, who endured a tough week.

Vodafone Australia announced last week that it would cut 500 office jobs by the end this month as part of a restructure to its business.

The mobile phone operator confirmed it would slash 10 percent of its workforce to enable a leaner, more effective operating model.

Vodafone has already confirmed that it will withdraw as Triple Eight’s major sponsor at the end of this season, making way for energy drink giant Red Bull to be the team’s major sponsor.

Whincup won all three races at Abu Dhabi’s Yas Marina Ciurcuit over the weekend, and in doing so, created a number of pieces of history. The wins helped the Commodore VE model rack up its 100th V8 Supercars win, while his Saturday double win meant that his Triple Eight chassis ‘Kate’ is the most successful V8 Supercars chassis of all-time, eclipsing the Falcon BA that Marcos Ambrose drove during his hey day.

It was a big weekend for Whincup, and despite all the records that were being achieved, he used the occasion to wish his team’s departing sponsor well.

“(But) I’d like to make a big shout out to Vodafone Australia who have had a pretty tough last week. We’d like to dedicate this one to you.

“I’m looking forward to having a bit of a rest before Winton. Winton will be a shock – we go from the most expensive race circuit in the world to the tight twisty Winton track. It should be interesting.”

The penultimate event on the V8 Supercars Championship will be held at Winton on November 16-18.