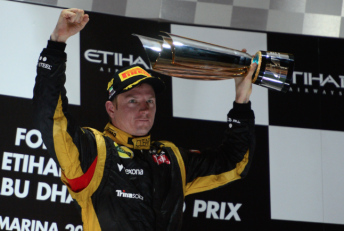 Lotus driver Kimi Raikkonen has scored his first victory after returning to Formula 1 at the start of 2012, winning the Abu Dhabi Grand Prix at the Yas Marina Circuit.

The Finn held off championship contender Fernando Alonso in a chaotic Grand Prix, securing his first F1 win since the 2009 Belgian GP.

Red Bull Racing’s Sebastian Vettel finished an amazing third, fighting through the field from last after receiving his post-qualifying penalty and starting from pit-lane.

The comeback drive limited the damage to his championship lead, with just 10 points now separating Vettel and Alonso with two races of the title remaining.

Despite the breakthrough win, Raikkonen is now officially out of contention for the driver’s title, but remains in a commanding position to take third place overall.

The Abu Dhabi race took a number of twists and turns – both for the lead and the minor places.

Two Safety Car’s punctuated the race. Nico Rosberg collected the suddenly ailing HRT of Narain Karthikeyan causing the first Safety Car, while debris from a clash between Mark Webber and Romain Grosjean on Lap 39 saw another period under yellow conditions.

Vettel’s drive was one of the best in recent memory. He started the race from pit-lane on Pirelli’s medium compound tyres, and the first Safety Car helped his recovery. An early brush with Williams’ Bruno Senna damaged his front wing, plus further damage was sustained when he hit a foam DRS track marker while avoiding Daniel Ricciardo in the later stages of the first Safety Car period. Vettel pitted after the off-track collision with the foam sign, switching to soft tyres and a new nose and wing. It dropped him back down the order, but he stormed back through, managing his tyre life perfectly. He even had enough speed to pass Jenson Button in a daring move for third place with only a handful of laps remaining.

Perhaps the biggest factor was pole-sitter Lewis Hamilton’s demise, who looked poised to cruise to victory. The McLaren driver was pulling away from the field until a mechanical failure ruled him out of the race on Lap 19.

Hamilton’s demise promoted Raikkonen to the lead that he never surrendered, despite some mild pressure from Alonso.

Webber had a luckless race, attempting to pass the Williams of Pastor Maldonado around the outside, only for the pair to collide. Webber spun and lost several positions, but remained a chance for a top five result until his race-ending crash.

Button ended up fourth ahead of Maldonado, who was suffering from a KERS issue.