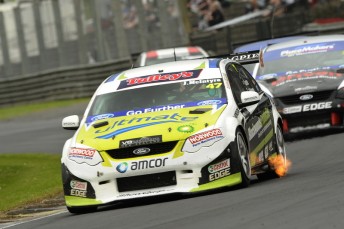 Taupo driver John McIntyre has vowed to claw his way back after a series of failures and incidents crippled his two-car bid at the Pukekohe 500.

Steering, suspension, gearbox and engine troubles put McIntyre’s Ford squad on the rack although both cars managed to squeeze out a couple of top 10 finishes.

McIntyre and co-driver Jono Lester finished seventh in the second of the three heats, their best result on the weekend while Steve Richards and Scott Harrison finished ninth in the final 70-lap race.

There was precious little else to salvage from the weekend where the JMR team were one of many teams stricken with engine and steering rack issues, the latter linked to the rear-end suspension geometry changes the series mandated in between the Taupo and Pukekohe enduros.