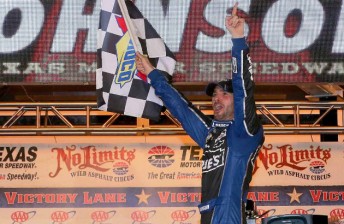 Jimmie Johnson has backed-up his win last week at Martinsville with a thrilling victory at the AAA Texas 500 at the ultra-fast Texas Motor Speedway.

Johnson pushed past leader, and championship rival, Brad Keselowski on a Green-White-Checkered finish to edge his lead to seven points with two races left to run at Phoenix and Homestead-Miami.

The pair battled throughout the 500 mile race with paint exchanged at times. Sitting in for the ride was Kyle Busch, who also had his chance to take the victory.

With long green flag runs during the race both Johnson and Keselowski enjoyed plenty of time at the front of the field. An economy run to the finish was ended when Australia’s Marcos Ambrose hit the wall after having a tyre go down.

The final round of stops saw Keselowski go to the lead after taking just right-side tyres, as compared to four all-round for both Johnson and Busch.

Keselowski appeared to be in the box seat, but another caution at the end gave Johnson his chance off the final re-start and he took it.

Ambrose ran inside the top-10, but when the sun went down so did the Tasmanian. The accident saw him placed 32nd 25-laps behind.

Despite the result Ambrose was pleased with the weekend with new crew chief Crew Chief Drew Blickensderfer.

“It’s a shame that we didn’t get the end result we deserved, but the early signs are that we are going to be strong,” said Ambrose.

“We’re communicating well, and improving the car with each session.

“Running with those guys in the fight for the Chase is a great feeling, and of lot of that came down to some smart work in the pits.

“We were front runners at Phoenix earlier this year, and we’ll head there next week with an aggressive mindset.”