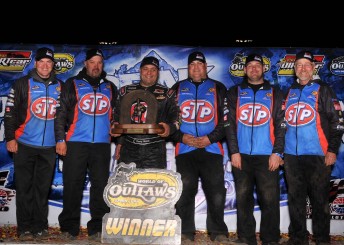 Dakota racer Donny Schatz has been crowned the 2012 World of Outlaws Sprintcar Champion despite crashing out of the Outlaws World Finals at The Dirt Track, Charlotte Motor Speedway.

The STP/Tony Stewart Racing driver cemented his position as one of the greats of Sprintcar racing. Having entered the event some 175 points ahead of Craig Dollansky, he was able to walk away with his first Championship since 2009.

Having won the season opening races, Schatz struggled with consistency early in the season. This wasn’t a problem from July onwards, where he took his J&J chassis to victory lane in nine events – elevating him to second in overall wins for the year – finished second nine times and finished in the top five 25 times from the final 29 races.

The 35-year-old was quick to praise team principal, Tony Stewart for his role in the turnaround.

“There were some moments this season when I was wondering if winning the championship would even be possible,” said Schatz. “At one point, I remember saying I felt like I was looking up from rock bottom. We got things turned around. Our communication got better. Tony helped us both on the track and with our communication as a team. Coming from where we were earlier in the year to having the success we’ve had since late July, that’s probably what makes this championship feel like a huge accomplishment.”

Schatz rated the 2012 Title, which also included his sixth Knoxville Nationals crown, as one of his most satisfying career achievements.

“This season has been one of the most rewarding ones of my career,” he reflected. “Everyone at Tony Stewart Racing should be proud of what we accomplished. From all the guys on the team, our teammates both in the Outlaws and USAC Series to our marketing partners… I could go on and on. The key was sticking together through the tough times. We were all in this together and now we can celebrate as one.”

Dale Blaney won the World Finals from Paul McMahan and Jason Johnson. Brooke Tatnell was 12th, whilst Kerry Madsen was one of the seven non-finishers.

With the American season coming to a close, many of the racers will head for a winter sojourn to Australia before the World of Outlaws fires back into life at Volusia, Florida in February.