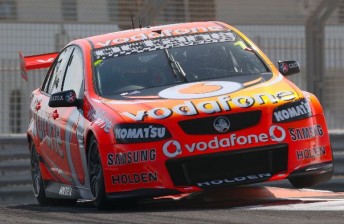 Jamie Whincup has further extended his commanding lead in the V8 Supercars Championship by completing his domination of the Abu Dhabi event with victory in Race 26.

Whincup’s only scare came in the opening metres when pole-sitter Will Davison made side-to-side contact with the TeamVodafone Holden as the pair fought for the ascendancy on the run to the first corner.

Tim Slade made the most of Davison’s wild start to take second, but the positions would eventually be reversed on the penultimate lap thanks to an inside pass from the Trading Post FPR Ford at Turn 21

Mark Winterbottom took to the grass at the Turn 11/12/13 complex in order to take fifth from James Moffat late in the going while Garth Tander, Lee Holdsworth, Rick Kelly and Fabian Coulthard completed the top 10.

The championship margin between Whincup and Winterbottom now stands at 296 points with just 600 still available over the final two events.

Race 26 ran its full 12 lap distance despite the Safety Car heading the field for three laps following a multi-car incident on Lap 2.

The fracas was triggered by Jonathon Webb tagging Jason Bright at Turn 17, spinning the Team BOC Holden into the path of Karl Reindler and Dean Fiore. The nose-to-tail collision between Reindler and Fiore split the fuel cell in the former’s car, which subsequently caught fire.

Although shaken by memories of his lucky escape from his massive startline fireball at Barbagallo last year, Reindler emerged unscathed.

Webb later served a drive-through penalty for the incident and eventually finished 21st.

Whincup’s win meanwhile ensures Holden the 2012 Manufacturers’ Award, presented to the marque with the most race wins in a season. All 16 of Holden’s victories have been delivered by TeamVodafone, with its factory Holden Racing Team in the midst of a 13 month drought.

The victory is also the VE Series Commodore’s 100th win (from 180 starts) in the V8 Supercars Championship.

See below for the full Race 26 result