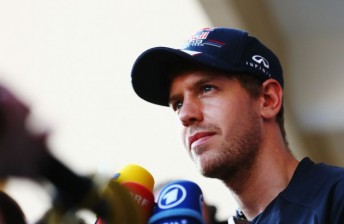 Sebastian Vettel will start off the back in Abu Dhabi

Defending two-time World Champion Sebastian Vettel will start off the back of tonight’s Abu Dhabi Grand Prix, after race officials declared his Red Bull completed qualifying with insufficient fuel and therefore the mandatory sample could not be taken.

Vettel, who holds a 13 point lead over Fernando Alonso, had set the third fastest time but was instructed by his team to bring his car to a halt immediately after crossing the line. CLICK HERE for qualifying report

F1’s regulations state that drivers must return to the pits under their own power so a one-litre fuel sample can be taken from the car for analysis.

Article 6.6.2 of the Technical Regulations states: “Competitors must ensure that a one litre sample of fuel may be taken from the car at any time during the Event.

“Except in cases of force majeure (accepted as such by the stewards of the meeting), if a sample of fuel is required after a practice session the car concerned must have first been driven back to the pits under its own power.”

Red Bull management made a case to FIA officials for why Vettel was instructed to stop on the track; which was accepted. However, it was found that Vettel’s car did not have enough fuel to provide the one-litre sample.

A statement issued by the FIA said: “The stewards heard from the driver and team representatives and studied telemetry evidence that showed the reason why the car was stopped.

“The Stewards accepted the explanation and considered the incident as being a case of force majeure.

“However a report was received from the Technical Delegate that showed during post-qualifying scrutineering an insufficient quantity of fuel for sampling purposes.”

Despite a threat of exclusion from the event, the stewards have allowed Vettel to start the race from the back of the grid.

It is the second time a leading driver has been put to the back of the grid after Lewis Hamilton’s pole in Spain was excluded when he failed to return to the pits and provide a fuel sample.