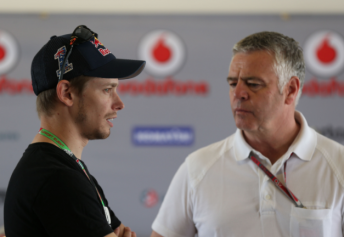 Casey Stoner may have yet to start a V8 Supercars race, but he’s already getting into the spirit of the Triple Eight/Ford Performance Racing rivalry.

The two-time MotoGP World Champion is on hand at this weekend’s Abu Dhabi Grand Prix as a guest of Red Bull, adding to his recent appearances with TeamVodafone at the Sandown 500 and Bathurst 1000.

Stoner, who is tipped to move into V8 Supercars in some capacity with Triple Eight next season, took to Twitter following today’s Race 26 to slam Winterbottom for a late-race pass the Ford Performance Racing driver made on rival James Moffat.

The move saw the two Falcons run side-by-side through the early part of the Turn 11/12/13 complex before Winterbottom completed the overtake by taking to the grass.

“Amateur racing from @mwinterbottom, didn’t know that you can use the grass to overtake!!” wrote Stoner on the social networking website.

Winterbottom was quick to reply following the race, writing: “seriously dude? You may need to attend a drivers briefing to work out our rules for next year as this was discussed.”

He then cheekily added in a second post: “I look forward to racing you and seeing how a professional performs. #ithinkigetpaid?”

Winterbottom also wrote that Stoner had been “brain washed already”, clearly referring to the amount of time the 27-year-old has spent with the TeamVodafone outfit in recent times.