Stewards hand down points penalties ahead of Race 26

Stewards hand down points penalties ahead of Race 26 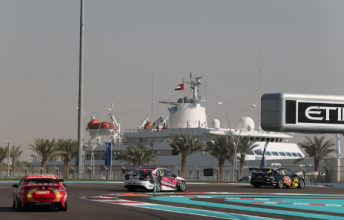 The stewards have come down hard on four competitors after a number of incidents from Races 24 and 25 of the V8 Supercars Championship at the Yas Marina Circuit yesterday.

Team Hiflex driver Tony D’Alberto was hit hardest, copping a 37 point penalty for his contact with Alexandre Premat and James Courtney at the hairpin on Lap 2 during Race 24.

The incident saw Courtney ruled out of the race with suspension damage, while Premat spun to the back of the field, eventually recovering to 20th place.

The penalty has dropped D’Alberto one place in the championship.

Also in Race 24, the stewards imposed a loss of 25 championship points for Bottle-O Racing’s David Reynolds after he made contact with the VIP Petfoods Falcon of Steve Owen at Turn 8.

The penalty sees Reynolds fall behind Lee Holdsworth in the championship, slipping to ninth.

In Race 25, Owen was on the end of a 25 point penalty of his own for contact with Premat.

Owen’s Dick Johnson Racing stablemate Dean Fiore also copped a 25 point penalty for making contact with a bollard at Turn 8 Lap 12. Fiore also received a suspended fine of $2000 until the end of the year for his misdemeanour.

The grid for Race 26 was set during yesterday’s qualifying session. Ford Performance Racing’s Will Davison will start from pole ahead of double winner Jamie Whincup and Stone Brothers Racing’s Shane van Gisbergen.

See below for the updated points standings ahead of Race 26