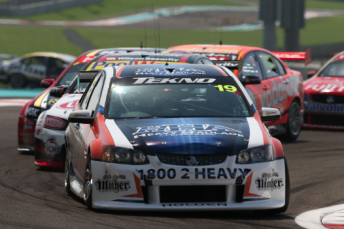 After collecting Jason Bright during the opening stages of the final race of the weekend at the Yas Marina Circuit today, Webb served a drive-through penalty.

That was not his last penalty, though, as he was later handed further penalties for “failing to use the track at all times.”

The Tekno Autosports driver was excluded from the results and copped a heavy 50 point penalty.

The points penalty sees Webb drop from 13th to 15th place in the V8 Supercars Championship.

The original incident set off a chain reaction that saw Karl Reindler and Dean Fiore involved.

The ensuring collision raptured the fuel cell of Reindler’s Commodore before it burst into flames.