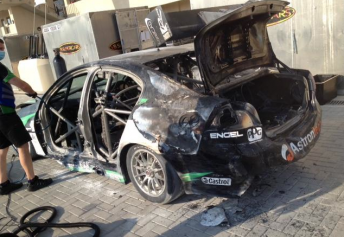 Karl Reindler says he could not believe he was forced to escape his second fiery V8 Supercars accident at Abu Dhabi today.

Following his dramatic crash at Barbagallo Raceway 18 months ago, the West Australian had to flee his #11 Fair Dinkum Sheds Commodore at the Yas Marina Circuit today after collecting Jason Bright’s stranded Team BOC entry during Race 26 of the V8 Supercars Championship.

After collecting Bright, Reindler’s car was slammed from the rear by Dean Fiore’s Falcon, rupturing the fuel cell and igniting into a mild fire.

A rattled Reindler says he saw flames inside his car and, without hesitation, fled the scene.

“I looked to my left and couldn’t believe I could see fire in the car again. I felt the heat on my face and the first thing I though obviously was back to last year and to just get the hell out of there,” Reindler said.

“I didn’t worry about unplugging any of the ancilliary items – the cool suit, helmet fan, the radio the water – I just got out. I figured if I ran fast enough they would snap of, which they did.

“I am honestly fine. I was shaken up, just because of the memories from last year. I’ve dealt with last year and as far as I am concerned that was just an unfortunate incident. I have no injuries this time. I can just forget about today and start working towards Winton.”

It is the second #11 Commodore that has been heavily damaged in a two week period after his regular car stayed in Melbourne after it was involved in a start-line accident at the Gold Coast with international driver Franck Montagny at the wheel.

Reindler says he feels for the Kelly Racing crew who will be forced to repair another damaged machine.

“The last thing the team needed with all of this tight turnaround stuff is another damaged car,” Reindler said.

“Franck Montagny damaged the one at Gold Coast two weeks ago and I am in Murph’s car this weekend. I can almost assure that’s not going to be the case at Winton in two weeks.

“It’s frustrating and unnecessary. It’s just unavoidable. You come around a corner, a car gets out of the way and you have got nowhere to go.”

The accident was caused when Jonathon Webb nudged Bright, who spun back onto the track. Webb served a drive-through penalty for his indiscretion.

The V8 Supercars Championship will now travel from Abu Dhabi to Winton Motor Raceway in regional Victoria for Races 27 on November 16-18.