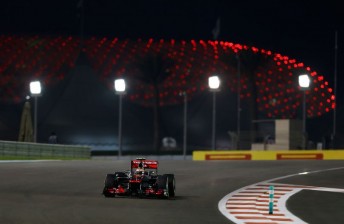 Lewis Hamilton will start the Abu Dhabi Grand Prix from pole position after topping qualifying for the seventh time this season.

There was post-session drama Vettel, who was asked by his team to shut down his RB8 on his in-lap. He was later disqualified from the session CLICK HERE for report.

The German had earlier completed just one flying lap in Practice 3 due to brake problems.

Pastor Maldonado was the surprise packet of qualifying in fourth ahead of Kimi Raikkonen, Jenson Button and a lacklustre title contender Fernando Alonso. Nico Rosberg, Felipe Massa and Romain Grosjean completed the top 10.

An unsafe pit release involving Alonso and Grosjean was investigated by stewards after the session, with no action taken.

Further down the order, Force India and Sauber both failed to make Q3 with their entries, while Michael Schumacher missed the top 10 cut-off for the second consecutive weekend.

* Vettel will start Rear Of Grid