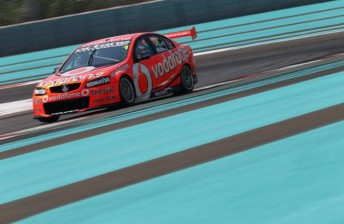 Jamie Whincup has strengthened his grip on the 2012 V8 Supercars Championship trophy by winning the first of three races for the weekend in Abu Dhabi.

The TeamVodafone Holden driver passed pole-sitter Will Davison partway through the first of 12 laps and was not headed for the duration.

Davison also slipped behind Shane van Gisbergen by the end of Lap 1, but was soon able to retake the position, eventually finishing 4.1s behind Whincup in second.

Van Gisbergen dropped a further 5.1s in arrears to finish third ahead of team-mates Tim Slade and Lee Holdsworth.

Winterbottom ran as low as ninth early but proved increasingly competitive as the laps progressed, setting his personal fastest lap on the final tour.

Alex Premat found himself at the back of the field after being turned around in a Lap 2 fracas with Tony D’Alberto and James Courtney. D’Alberto attempted to pass Courtney into the Turn 7 hairpin on the second lap, tagging both Holdens in the process. The contact damaged Courtney’s front-suspension, forcing him out of the race.

Rick Kelly also took minor damage in the incident before heading to the pits mid-race with smoke emanating from his Jack Daniel’s Racing Holden. The 2006 champion later returned to the circuit to finish three laps down in 27th.

Steve Owen was also not immune from the sprint race fisticuffs, with the VIP Petfoods Ford turned around by David Reynolds in a battle for 14th on Lap 3. Owen went on to finish 23rd, 10 places behind Reynolds.

Race 24 was completed solely on the hard compound Dunlop rubber, with soft tyres to be used in Races 25 and 26.

See below for the full Race 24 result