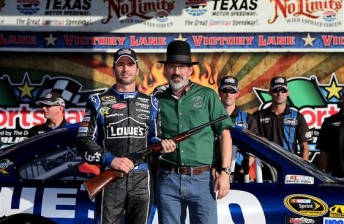 Jimmie Johnson’s push for his sixth NASCAR Sprint Cup title got another boost by clocking the fastest time in qualifying for the AAA Texas 500 at Texas Motor Speedway.

Holding a two-point advantage over Brad Keselowski in the championship, Johnson set the benchmark speed of 191.076 mph (307.508 km/h). It’s his second week in a row as the pole sitter, and he last week at Martinsville he turned that into victory with three races left (Texas, Phoenix & Miami).

Keselowski qualified eighth at a track where he has never had a top-10 finish.

Johnson finished second at Texas in April, a race won by Greg Biffle. Biffle will start on the front row with Johnson.

Australia’s has his third crew chief in his corner this weekend with Drew Blickensderfer replacing Mike Ford during the week; the Aussie will start 15th.

“It’s been a brand new day here with a new crew chief and I think it’s been a really successful day so far,” said Ambrose.

“I missed it there in qualifying a little bit, just didn’t get to the bottom. But we’ll take this as a really good positive step for our team and look forward to the race.”