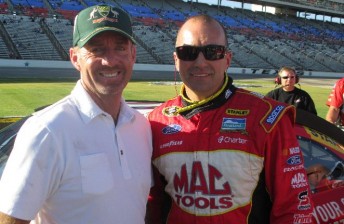 Pampling and Ambrose on pit road

Marcos Ambrose had a little Aussie support in the pit lane today before qualifying for the AAA 500 at the Dallas Motor Speedway in Texas.

Aussie Golfer Rod Pampling, who plays on the US PGA tour and who won the Australian Masters in 2008, was there in support.

Pampling, who has a house in Brisbane, lives in Dallas and will have a family dinner with Ambrose tomorrow night.

Pampling has been on the US Tour since 2002 and won The Invitational in 2004 and the Bay Hill Invitational two years later.

He also tied for fifth at The Masters at Augusta in 2005, but has been trying to get himself back in contention for a spot in the world’s most prestigious tournament since finishing tied for 37th in 2007.

Ambrose is a keen golfer and although he only started playing a few years ago, was soon off single figures.

Pampling, who was showing his support in an Australian cricket cap, is one of several leading Australian golfers on the US tour who has become friends with Ambrose.

“We usually come on race day, so it was good to be here today and see what happens in qualifying,” Pampling told Speedcafe.com.

“We have played golf a couple of times together, but timing has permitted no more than that.

“We can’t wait for him to win on an oval. He goes OK here (Dallas), maybe he will get it done this weekend with a bit of luck.”