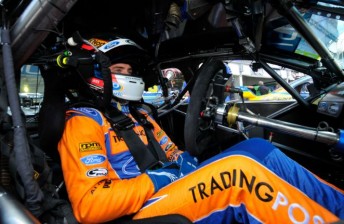 Will Davison will start all three V8 Supercars Championship races in Abu Dhabi this weekend from pole position after an impressive qualifying run from the Trading Post FPR Falcon.

In a unique format adopted for the weekend, each driver’s three fastest times set the grids for Races 24, 25 and 26 respectively.

While Jamie Whincup and Shane van Gisbergen swapped the top spot for 18 of the 20 minutes, Davison moved to the top with 2:11.77s on his penultimate lap before clocking 2:12.41s on his final attempt.

Those two times combined with a 2:11.93s set on his second of three runs to ensure the factor Ford driver the triple-pole.

The results mean that Davison jumps from a season tally of five pole positions to eight, two clear of previous benchmark Whincup.

Remarkably, Whincup and Van Gisbergen will start second and third in each of the three races.

The TeamVodafone driver’s fastest lap proved just 0.12s off of Davison’s best and came on the first lap of his second run. A subsequent set-up change prior to the final outing then appeared to hamper Whincup, who ended the session by running a 2:12.27s followed by a pair of 2:15s.

It was a strong session for all three Stone Brothers Racing Falcons, with Lee Holdsworth and Tim Slade set to join team-mate Van Gisbergen in starting from within the top 10 in each race. The SBR Fords were the ‘single lap bandits’ of the session, recording all but one of their cumulative nine grid-setting times on first flying laps following tyre changes.

It was also an encouraging outing for Team Norton DJR’s James Moffat, who is set to start from a career best fifth in Race 26.

Greg Murphy meanwhile will start from the back in each race after mechanical gremlins in the #51 Pepsi Holden continued to dog the car in qualifying.

See below for the full Race 24 grid

See below for the full Race 25 grid

See below for the full Race 26 grid