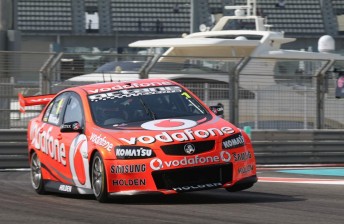 V8 Supercars Championship leader Jamie Whincup has thrown down the gauntlet ahead of qualifying in Abu Dhabi, topping the second practice session of the day.

The TeamVodafone driver sat atop the sheets from the early minutes, setting his best time of 2:13.66s on just his fourth of 11 laps.

A number of drivers, including the three Ford Performance Racing Falcon pilots Will Davison, Mark Winterbottom and David Reynolds, elected against dipping into their soft tyre bank during the session and ended up down the order.

Greg Murphy’s difficult day continued as the Pepsi Max Crew Holden failed to add to its single flying lap from Practice 1, sitting in the garage with mechanical issues for most of the 30 minutes.

A 20 minute qualifying session will complete the Friday running for the V8 Supercars at the Yas Marina Circuit. Each driver’s three fastest times in the session will determine the grid for Races 24, 25 and 26 respectively.