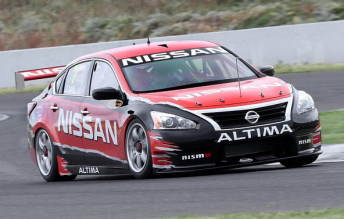 Todd Kelly in the new Nissan Altima at Calder today

Todd Kelly given his tick of approval to the Nissan Altima V8 Supercar after its maiden track session at Calder Park Raceway today.

Despite telling the press that he would not drive the new car due to his recent shoulder surgery, Kelly completed the car’s first track test, overcoming the pain by driving “one handed.”

Kelly drove several installation laps on the 2.28-kilometre circuit to kick-off the day’s proceedings, not jeopardising his rehabilitation from shoulder surgery.

The team reported that the new Altima ran flawlessly in today’s track running, conducted three days after its official unveiling in the Docklands, Melbourne.

Despite nursing his injury, Kelly was over the moon with the performance of the car on Day 1.

“It was pretty amazing. I’m not supposed to drive a race car for another two and a half months, so don’t tell anyone I just jumped out of that!” Kelly said after his one and only drive today.

“But after all the work we’ve put in, how the car has come up, and the engine, I couldn’t not have a steer of it.

See below for video of the shakedown