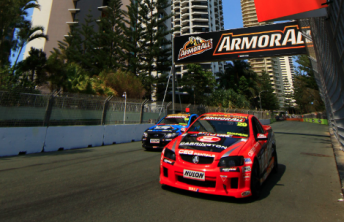 Albury Formula Ford driver Matthew Chahda will make his Auto One V8 Ute Racing Series – protected by Armor All debut at Winton later this month, becoming the youngest driver in the field.

Chahda, 19, will not get a chance to test the Williams Race-Tech prepared Holden Ute before he hits the track for practice, however will take with him his experience racing at Winton in Formula Ford and is looking forward to racing against drivers he’s admired over the years like Cameron McConville and Nathan Pretty.

“I’m a bit nervous to go straight out in a field of experienced drivers but it should be good,” Chahda said.

“I know who most of the guys are and since we put the deal together I’ve been studying the driving through YouTube. I’m excited to see where I can stand with some of these guys that have raced at top level.”

The TAFE Motorsport student is the 15th rookie that Williams Race Tech has looked after in the past three years and team manager Wayne Williams is looking forward to the task.

“Matt is a confident up-and-comer and we are keen to see what he can do in a Ute,” said Williams.

Chahda recently won the round at Eastern Creek in the NSW Formula Ford 1600 Championship and is the favourite to take out the Rookie of the year title after the final round of the state series this weekend.

He will join a long-line of drivers who have come out of the region including current V8 Ute drivers Nathan Pretty, Hayley Swanson and Tom Williamson.

The V8 Utes will have two practice sessions, qualifying and three races spread over the three days, to be held from November 16-18.