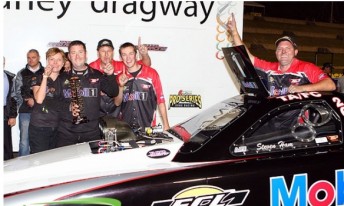 Steven Ham and his crew are hoping to visit Victory Lane in Sydney again this weekend (PIC: Cackling Pipes)

Several off season equipment changes has Brisbane Top Alcohol racer, Steven Ham, hoping this weekend’s Australian Nationals at Sydney Dragway will get his season underway in the best fashion possible, on the track where he took his first ANDRA Top Alcohol win earlier this year.

Ham has upgraded the Mobil 1 Funny Car with new Noonan Race Engineering X1 cylinder heads, which he hopes will solve an issue the team has had for some time.

“Our weak link for a few seasons now has been our top end speed, we’re confident that we will step into new territory this season and go past our top speed of 415kph (258mph), which is pretty conservative compared to what other Top Alcohol racers are getting,” said Ham.

The Noonan cylinder head has quickly gained acclaim both in Australia and around the drag racing world as the package to beat.

Ham accepts that to repeat his victory from the Nitro Champs will be no easy feat.

“The class has really moved forward in the past year, with 5.4 second runs regularly and most teams being able to push 5.5 seconds,” he said. “I think we need to run 5.4 second passes more often than not to keep the round wins flowing.”

The Australian Nationals is held this weekend at Sydney Dragway with every professional category in ANDRA Drag Racing competing.