Nico Hulkenberg confirmed at Sauber for 2013

Nico Hulkenberg confirmed at Sauber for 2013 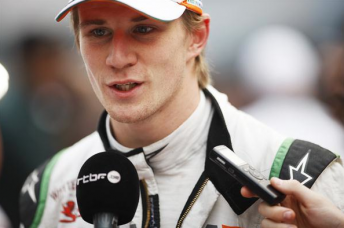 Nico Hulkenberg has been confirmed as Sergio Perez’s replacement at Sauber for the 2013 Formula 1 season.

The 25-year-old German, currently 12th in the championship for Force India, is the first driver to be confirmed at Sauber for next season.

Current Sauber driver Kamui Kobayashi is off contract at the end of this year, but is unlikely to be retained by the Swiss squad, with Mexican Esteban Gutierrez heavily linked to the seat.

The Sauber team says it will confirm its second driver in the coming months.

Hulkenberg is pleased to have secured his place at Sauber, having enjoyed a strong return year to the sport.

“It’s a well-placed team and very competitive. Plus it’s a team in which young drivers have repeatedly delivered exceptional performances.

“I would like to take up that baton. The Sauber F1 Team is currently going through a very positive development and I’m certain that together we can achieve a lot.

The Formula 1 world championship continues in Abu Dhabi this weekend.