Lowndes: I need Abu Dhabi wins to remain in hunt

Lowndes: I need Abu Dhabi wins to remain in hunt 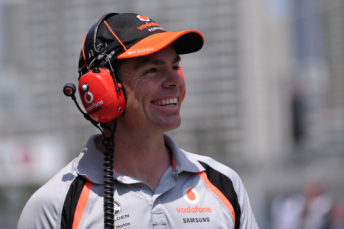 TeamVodafone star Craig Lowndes says he needs a big haul of points at Abu Dhabi to remain in the hunt for the 2012 V8 Supercars Championship.

In the four races at Abu Dhabi (2010 and 2011), Lowndes has scored just one podium finish, while his team-mate has three of the four V8 races held at the circuit. The other win went to  the Holden Racing Team’s James Courtney.

Lowndes knows that he has to turn a weak run of results at the Yas Marina Circuit, plus bag a strong set of result to keep his championship hopes alive.

“I am feeling really confident about heading back to Abu Dhabi. Even though my results don’t show it, it is a circuit that I like racing on,” Lowndes said.

“We will be racing on the full circuit for the first time which will definitely make for some exciting racing.

“I need to come away with a good points haul this weekend to make sure I remain in the title hunt.”

Practice for the V8 Supercars in Abu Dhabi starts on Friday.