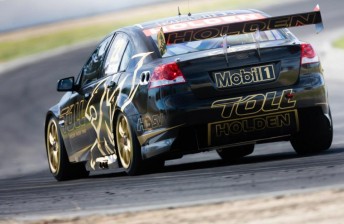 The Holden Racing Team will complete a full day of running with its Car of the Future at Winton Motor Raceway today in a bid to help V8 Supercars find a final solution to the gearbox cooling issues that have troubled the 2013-specification cars.

The category has grappled with how to best cool the new Albins transaxle gearboxes since the beginning of its COTF prototype testing program and is yet to lock-in a specification for what will be a control cooler package.

All five teams to have tested their first COTF vehicles – Triple Eight, Ford Performance Racing, the HRT, Stone Brothers Racing and Garry Rogers Motorsport – have provided data to the category by running their own cooling solutions, with each of the last four teams granted extensions to their initial shakedowns in order to undertake the testing.

Today’s Winton running will not count as part of the HRT’s testing log, and will see V8 Supercars technical staff on-hand to ensure that the team does not benefit from the extra running.

Although today’s testing could see a final solution found, Triple Eight is slated to run another iteration of cooler design during its next test at Queensland Raceway on November 8.

It is understood that V8 Supercars is particularly keen to have the issue sorted before the next round of aerodynamic comparison testing gets underway in the coming weeks, with the designs tested so far having been heavily critiqued on both their cooling and aerodynamic efficiency.

Walkinshaw Racing’s Dunlop Series regular, Nick Percat, will drive the HRT COTF today as the team’s V8 Supercars Championship drivers are already in Abu Dhabi. Percat will be attending the Yas Marina event as a guest of personal sponsor Morris Finance, but does not leave until tonight.

The 24-year-old Percat was given the honour of shaking down the HRT’s COTF at Calder on September 20, having previously steered the category’s Holden COTF prototype during demonstration runs at March’s Clipsal 500 Adelaide.

The HRT’s COTF remains in its VE model Commodore bodywork as development of the VF that it will race next season continues. Aside from its shakedown, the car’s only on-track running took place at its first Winton test on September 25, where it was steered by James Courtney.

CLICK HERE for Speedcafe.com’s previous story on the VF’s development