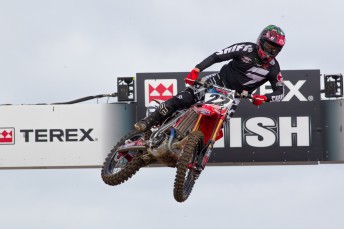 Casey Stoner may have taken the lion’s share of the headlines over the Phillip Island MotoGP weekend, but there was another high-credentialed Australian doing some winning at the Island circuit.

Aussie Supercross legend Chad Reed was a guest competitor in Round 2 of the Terex Australian Supercross Championships at Phillip Island on Saturday night.

Speedcafe.com’s Grant Rowley caught up with Reed to talk about his recent NASCAR testing, the potential of a future in V8 Supercars and Casey Stoner’s amazing Island farewell.

SPEEDCAFE: You’ve been weighing up you future for some time, which for a while included V8 Supercars as an option. At this point, you’ve locked yourself into remaining a Supercross competitor, but if a switch to four-wheels does occur in the future, it is likely to be in NASCAR … 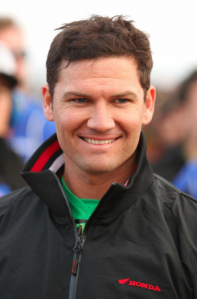 CHAD REED: NASCAR is, maybe, the better choice at this time. In terms of V8 Supercars. I do hear that the rules are changing to allow some more testing, which has been a major hurdle.

At the moment, it’s too hard for someone like myself, or even Casey. It will take time.

You would need a team that 100 percent supports your ability to do the job and be prepared to spend and waste some money. The reality is that you’re going to tear up cars, and you need to build a car that’s off the grid so you can spend time doing testing.

The guys racing V8s now have been driving go-karts and have been around circuit racing their whole life – just like most of us guys on two wheels.

Look at Casey Stoner at Phillip Island. It’s natural to him. He knew what he had to do and he dominated the best riders in the world. No one had an answer for him.

Honestly, when I retire, I have two kids, so life will take me in the direction I’m supposed to go, and if that brings me to Australia and work on V8 Supercars, then so be it. If not, and I stay in America, then maybe it’s NASCAR racing.

SPEEDCAFE: NASCAR racing does allow a greater chance to hone your skills, given the sheer number of classes that they have …

Recently, I’ve done a lot of work with Marcos Ambrose and his team, driving one of his late model cars in North Carolina. It’s a blast. I absolutely love it.

Not to sound cocky, but driving the car is easy, but getting out there with 25 others, being door to door, respecting the space, that’s a challenge. On a dirt bike, you can go elbow to elbow and feel it. With a cage around you, you tend to treat it like a dodgem car, you get pushed around.

With what I’ve learnt by doing a couple of races with Ambrose, it’s a lot harder than its looks. Going left, left, left, you’d think it’s no big deal. I’ve tested a V8 Supercar, I’ve tested a NASCAR, and going left is the hardest thing I’ve ever done.

We’ll see. I might not even have the skills, but I know we have the mentality, the thinking and the brains behind us to steer us in the right direction.

SPEEDCAFE: How long do you feel you’ll continue with Supercross before attempting a four wheel career, if that’s what you indeed chose to do?

REED: I don’t know. I’m 30. Even to make transition into car racing, it’s old. My window is small. It would take someone and be a big gamble.

For me, when I walk away from dirt bikes, there’s no coming back, especially when I’m in already in 30s. You’ve got to walk away knowing that you’ve done you’re best and there’s no more and, ifs or buts.

Right now, I’m loving it. My passion for motorsports and motorcycles is really strong.

I’d love to do this for another year or two, and then try and make that transition into cars and see if the skills I have can match up to what I need against the best drivers in the world.

SPEEDCAFE: You were down at Phillip Island, competing in the Supercross event at the track. What were your thoughts on the concept?

REED: It was amazing. The atmosphere we had on Saturday and into the evening was on par with how it is in the US.

Having the MotoGP fans there was great, and the fact they were all there rooting for Casey (Stoner). Casey is the road race guy, and then on the Supercross side … I guess we’re both the ones who have been successful on bikes on an international level.

I was a last minute, added bonus there, but it was a very unique event, great to be there and I hope I can return next year to make it even bigger and better.

SPEEDCAFE: We saw a huge crowd at Phillip Island, and most of those were there to farewell Casey Stoner. Do you feel that the Australian fans will have to work hard on their love for MotoGP, without a leading Australian in the field?

REED: Yeah. You look at the crowds, record crowds there … it will be interesting to see how it backs up next year.

SPEEDCAFE: And what are your thoughts on Stoner’s retirement. Has he made the right call?

REED: It’s kind of surreal. To see him out there, see him going through the motions of being the fastest guy in every session, being prepared to crash, and to think he’s willing to walk away from that … I know that life is not about the money, but as a 30 year that’s been through a lot of the ups and downs that he has, and living abroad, I honestly believe that he’ll wake up in a year or two from now and he’ll think “what the hell did I do?”

You have to respect his choice. I don’t live in his world. I don’t know it 100 percent. He has a wife and a child, and that can change life drastically.

For me, it really made my passion for the sport stronger. The fact I get to see my son and have him so into it, and be so excited to be at a dirt bike track, it makes me proud and makes me want to work hard and share it with him.

Maybe in Casey’s life, it has gone in the opposite direction. He wants to be a little safer and not lay it all on the line.

Only Casey knows how he feels, so I respect what he’s doing, but I don’t totally understand it.