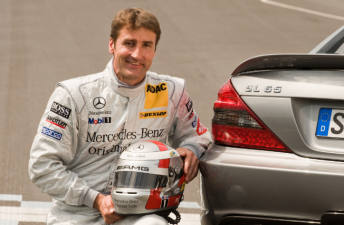 German touring car great Bernd Schneider will make his first race appearance in Australia at the Sydney Telstra 500 this December.

The five-time DTM Champion, FIA GT Champion and Mercedes-AMG legend will compete for Erebus Motorsport in the final round of the Australian GT Championship around the Sydney street circuit.

After retiring from DTM full-time at the end of the 2008 season, Schneider has been working as an AMG Ambassador and as part of the AMG Customer Sports program which manages the SLS AMG GT3 program.

The 48-year-old has visited Australia to take past for an AMG event at Mount Panorama in 2008, but has never competed in a motor race. He did, however, attempt to qualify for the 1989 Australian Grand Prix in Adelaide for Zakspeed.

He says that he is making the trek with the aim to win, but knows he has a job to do for the team.

“I will be there to win – I never enter a race not to win, but the main goal is for Erebus Motorsport to win the first championship outside Europe for AMG Customer Sports,” said Schneider.

“I’ll be doing whatever I can to help the team achieve this goal.”

Schneider is the third international driver to join the expanding team in a one-off capacity. Maro Engel drove with the team at Phillip Island, while Thomas Jäger drove at the Gold Coast.

Erebus Motorsport’s CEO Ryan Maddison says that Schneider is a massive coup for his team and the event.

“We’re ecstatic to have someone of Bernd’s experience, capability and talent join our program in Sydney,” he said.

“When you talk AMG and motorsport, you talk Bernd Schneider.

“He hasn’t been to Australia since 2008 when he was the star attraction at the AMG drive event at Bathurst. To have him here and racing one of our cars at the final event of the year is going to be massive.

“I expect that we’ll have a great deal of AMG enthusiasts from all over Australia heading to Sydney Olympic Park for a very, very rare opportunity to see one of the world’s best touring car exponents in action.

“It’s a huge addition to the Sydney event.”

The Sydney Telstra 500 will be held at the Homebush street track on December 1-2.