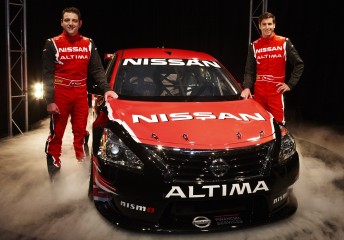 After close to two decades of Ford/Holden duopoly, Nissan and Mercedes Benz AMG will rock the establishment next year, competing in their Altima and E-Series cars respectively.

At the launch of the Nissan Altima V8 Supercar today, the former V8 Supercars champion say that the landscape for the fans will change – if it already hasn’t.

“(Nissan’s return) is re-energising the rivalry back into V8 Supercars,” Kelly said.

“I think the rivalry between Ford and Holden has dropped off a bit over the past few years.

“I remember the days when you get to the race track, having done nothing wrong, and you’d get abused by a Ford fan. He’s passionate, he goes for Ford, we’re Holden at that point. I think this is going to bring it back into the sport.”

Kelly expects opening event of the championship next year to be an eye-opening experience, even for the diehard fans.

“They’ll be people on our bandwagon, and then there’s the people who’ll go for Ford, Holden, and not so much us,” he said.

“But that’s something that excites us. That’s what makes the sport so great – the rivalry and the passion – and I think Clipsal is really going to show that. It’s going to be huge.”

See below for Speedcafe.com’s news video with Rick Kelly from today’s launch.

See below for Speedcafe.com’s coverage of today’s launch

CLICK HERE for Speedcafe.com’s news story on the Altima’s launch