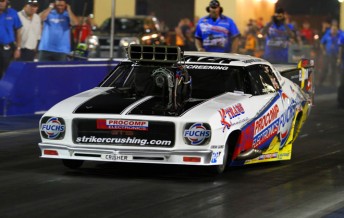 Following the retirement of Robin Judd at the end of the 2011/2012 ANDRA Drag Racing season, one could be forgiven for thinking that arch rival and fellow West Aussie John Zappia would have an easy run at taking his record equalling sixth straight Top Doorslammer Championship title in season 2013, but that is far from the case.

With the Championship firing back into life this weekend at the Australian Nationals at Sydney Dragway, Zappia is under more pressure in his iconic Monaro than ever before.

Victorian veteran, Peter Kapiris has worked solidly over the last 18 months to get himself into a position to be a true Championship contender. In fact, if it wasn’t for a late season fightback from Zappia, Kapiris could well likely have ended the quiet West Australian’s Championship streak.

Kapiris has the horsepower at his disposal and has been approaching the consistency required across the season to be a contender.

Consistency is the area that Zappia has worked hardest on – particularly off the startline. He admits that despite approaching the 5.7 second bracket regularly, tardy reaction times have been partially down to him, but is hoping they will be behind him come this weekend.

“It’s half the car and half me,” said Zappia. “We are making changes to try and make the car leave harder, it’s a bit soft over the first ten feet so we need to make that area quicker which will help with the reaction times.”

Chronic tyre shake has been another issue for Zappia, particularly at Sydney and Willowbank – although plenty of competitors would be happy with the pass without tyre shake that he managed at the Winternationals…

“We were having troubles with at both Sydney and Willowbank,” Zappia explained. “We were shaking the tyres even when we ran the 5.75 at Willowbank but we got away with it. On other runs I have had to pedal and that is how we have lost some races.”

Another driver considered being able to step up to the defending Champion this season is fellow Holden hero, Ben Bray. Whilst its been a quiet run over recent years for the Sidchrome kid, he has, on average, the best reaction time in the Doorslammer category. If Team Bray can work the tyre shake out of the Monaro and get him down the track, there’s every opportunity the Bray name could be back at the pinnacle of the sport once again.

Whilst many are predicting Zappia domination, the man himself believes this will be one of the toughest seasons over recent years with a number of competitors stepping up, including  2012 Winternationals finalist, Andrew Sutton.

The Australian Nationals sees the opening round for many of the ANDRA professional drag racing categories and the Sportsman categories, with qualifying throughout Friday and Saturday and eliminations on Sunday.